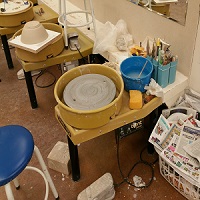 Human culture has been dominated by pottery and ceramics for thousands of years. Innumerable human endeavors have relied on pottery and ceramics, from prehistoric storage jars to tiles on the space shuttles. Ceramics are materials that are permanently altered when heated. When dried clay objects are put in water, they will slake down (disintegrate) due to chemically bonded water in them. When heated to between 660 and 1470 F (350 and 800 C), clay becomes ceramic and will never dissolve again. In addition to clay, there are other ceramic materials. Because glazes change permanently during firing, they are also ceramic materials. Silica carbide and zirconium oxide are among the materials used in industrial ceramics.
In general, pottery refers to clay containers. Various types of containers can be called pots. Originally, both words were derived from the Old English potian, which meant “to push”. As the potter throws clay on the wheel, it is easy to see how the process got its name. “Pottery” can also be used as an adjective for some objects, such as small figurines.